Late last year, my mom was trying to clear out things from my recently-passed grandfather.  One of those things was an old camera of his, which at my suggestion she sent to KEH.  They offered her only a few dollars for it because of fungus, and she felt insulted enough to have them mail it back, even though she mostly just needed to clear up the space.

When this film obsession came upon me quite suddenly, it occurred to me that I might be interested in this camera.  I didn't know what it was, and it evidently had some fungus in the lenses, but I could probably buy new ones cheaply.  And the idea of using my grampa's camera resonated with my heart.  So I talked to my mom and she agreed to bring it up the next time she visited.

The camera ended up being a Minolta SR-T 101, with two primes and a telephoto zoom.  I took it with me while dropping off film at my local camera store, and my friend who works there gave me the name of a local repairman but suggested that I first shoot a roll through it to see if the image quality was still acceptable despite the small fungus spots.

So I did.  I didn't actually see the results of these tests for many months, however, due to the combination of several factors.  The first was that this is a 135 camera, which means I had to make it through 36 pictures before I'd finish the roll.  In our digital world that might not seem like much, but compared to the 12 of the Flexaret it seemed interminable.  This was compounded by the fact that I didn't actually like shooting it very much - it was big, heavy, and I couldn't easily tell when I had anything in focus.  And bizarrely, you had to bring the camera up to your eye! (Recall that I  always use the tilt screen on my MILC, and the Flexaret has a waist-level finder.)  Such an unnatural thing to do and it ruined all sorts of candid shots.

And then our good friend covid-19 hit the United States; the second hotspot after Seattle was California's Santa Clara county, which we're right on the border of, and so we went into quarantine in early March, the week after I started on my first SR-T roll.  In addition to having an infant, we were dealing with unknown, bizarre, and frankly quite terrifying medical issues, and so I was operating on emergency "just getting by" status for a while - the specific story is ours, but similar ones are widespread this year.  In this state, a camera that wasn't fun wasn't one I was going to deal with, so the SR-T got put aside for a bit.

While my local lab was open much longer than they should've been, I had stopped venturing out of the house.  We didn't have much information about how the virus spread, or when this might be over, so I just kept putting my rolls of exposed film in the fridge to be developed later.  Eventually I realized I needed to get them mailed off for development.  My lab wasn't offering mail-in service, so I found another one thanks to the excellently-curated r/analog wiki.  But then I needed to have a way to mail them - so I ordered flat rate packaging from the post office.  And then I waited.  It turns out that although they have envelopes and boxes at every post office, USPS instead ships these from a central location, and does so at a very low priority.  It took so long for them to ship them out that I ordered a second set, thinking the first got lost somewhere.  But finally, almost a month later, I had the packaging, I had a lab to send it to, and I sent off 11 rolls in the mail.  It was nerve-wracking sending off most of the photos I had taken the last three months to a new address and waiting to find out if I had lost them all. 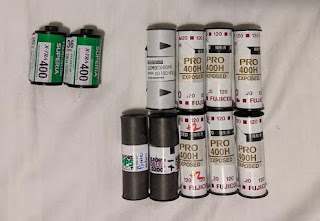 I didn't lose them, and after a bit of covid-induced delay I had scans to look at for the first time from the 101.  There was both good news and bad news.

The good news is that there weren't significant enough problems with the lenses to bother me.

The bad news was that many of my pictures were desperately out of focus.

I'm still not entirely sure what happened here, whether it's a hardware adjustment or my bad eyes.  But with more practice, while I rarely get focus exactly right, I haven't gotten anything this far off in a while.

But anyways, let's talk the gear for a bit.

The SR-T 101 is a fully mechanical SLR, a bit of a beast in 35mm land.  It definitely falls in the category of "tank" cameras - I worry less about my daughter hurting it while playing with the camera than the camera dropping on her foot and breaking some little child bones.  Other than leaving it in a dark and humid closet for years, my grampa took care of this camera, but I'm not sure if abuse could've done much to it anyway.

This camera has a two-part CdS through-the-lens meter, which was cutting edge in its day.  As often happens with cameras of this era, it takes a mercury battery that's no longer available; there are workarounds, but since I had gotten used to a combination of external metering and relying on negative film exposure latitude with the meterless Flexaret, I've yet to bother getting the meter to work.

The shutter goes up to 1/1000, which is the fastest of any of my film cameras currently.  With a maximum aperture of f1.4 on the 50mm lens, that gives me a relatively wide range; for people used to SLRs it may not seem impressive, but when you're in TLR land with a fast shutter speed of 1/300 and a maximum aperture of f3.5 on the other end, you've got to pay attention to the film you load in.  For a time this made the SR-T my outside-in-the-evening camera, loaded with 400 speed film: the high shutter speed allowed me to get attractive shallow depths of field if the sun was still a bit high, and the wide aperture kept me going as the light faded.

Most recently I've moved it to an indoors camera, loaded with T-max 3200 exposed at EI 6400; I've just gotten the first roll back and was satisfied with the results, and so have a second loaded into the camera, which is sitting next to me as I write this.

Lens-wise, I've stayed for the moment with the three lenses that came to me with the camera.  In reverse order of preference, we have first the Sigma 80-200; this lens feels wonderful but is so heavy I was unable to hold the camera at all steady, even when trying to implement advanced hand-holding stability methods.  After two photos I put it aside indefinitely.

Secondly we have a Vivitar 28mm.  This is a focal length I rather enjoy, but I haven't been using this lens often because it's not as fast as the 50mm, and I often find myself needing those extra stops.  And besides, with manual focusing (and a very long twist to do so), I'm not shooting as close to my daughter as I do with my Oly 17mm on micro four thirds.

Finally, we have a Minolta MC Rokkor-PG 50mm f1.4.  This also has an irritatingly long focal twist (a full 180 degrees), but in spite of that it's what stays on the camera most of the time.  I'm not in love with how it renders out of focus areas, but it's serviceable and physically the most versatile of all my lenses, for any camera.

I'm still not in love with the SR-T.  I've been considering buying a new lens, since there are apparently some great MC and MD lenses, but it's hard to say if they would help me love the camera or if I'd just be putting money into a system that doesn't spark that special joy.  But in the mean time, it has earned a place of regular use.