Low film camera prices and blogs of different cameras like 35mmc encouraged in me a desire to try a rangefinder camera.  I knew they were a thing that some people really liked, but I had never gotten a chance to use one.  And now that I had some experience with film (at this point, about three months), I could finally see what they were all about.

I had been shooting in manual from the start of film, so I didn't need anything metered.  And I didn't trust electronics to survive very well, so I wanted to look only for fully mechanical cameras, or ones where electronics were used only for an ignorable metering system.

There are a number of articles laying out the best rangefinder options.  I don't recall all of the ones I looked at, but I know I read these (and their comment sections):

One of the problems with these articles, and with film camera buying guides in general, is that any camera mentioned as a good cheap option will inevitably become less cheap as a result of the article.  A prime example of this in the rangefinder world is the Canonet QL17 GIII.  This particular model is the newest and fanciest of a long line of Canonets; when they all cost the same it was obvious to pick up that particular model, but due to its presence in most "good cheap rangefinder" lists, it now commands a premium that's probably undeserved.  It also makes finding any information on other Canonet models practically impossible on Youtube, since you need to publish videos on popular subjects to get views and therefore money, and so the QL17 GIII has swamped out any other versions.

My preference for all-mechanical took several popular options out of the running, like the Yashica Electro.  Price increases over the last few years removed certain others.  I also began to frame this as a search for a "Disneyland camera", since I heard rangefinders were fast to focus and generally compact, and so I focused in on small size as well.  With these criteria you will inevitably end up looking at the Olympus 35 RC, as it is the smallest mechanical rangefinder (to my knowledge).  It is not a terribly popular camera, so it took me a couple weeks of monitoring eBay to pick up one in what appeared decent condition for $100 including shipping.

I very quickly fell in love with this camera.

It really is a tiny little thing.  It isn't actually tiny enough to make a difference in storage for me (it technically fits in the back pocket of my jeans, but the lens makes it difficult to put in or pull out, so it is still not small enough to be a "pocket camera" the way a smartphone is), but the small size is a delight to carry around and use.  I use a first generation Peak Design Cuff for most of my cameras, and the RC is light enough I don't feel like I'm going to break my wrist when I have to let go of the camera to grab a toddler.  Despite being small, I find it comfortable to shoot with, and it easily disappears mentally to where I don't have to think about hauling around a camera. 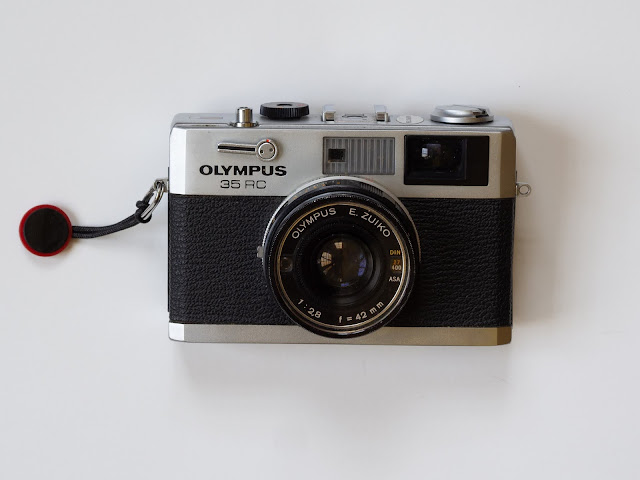 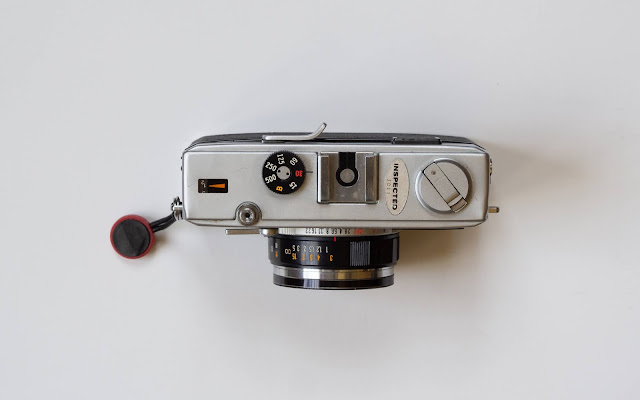 The advance lever is also incredibly pleasant to use.  It moves smoothly, makes a quiet but nice "schick", and is ergonomically well-designed.

I also quickly appreciated the extremely short focus throw of the camera.  3 feet to infinity is less than a quarter of a turn; while this isn't your best option for highly-precise focusing, this camera is designed to be used in action and a short throw is a great trade-off for that purpose.

Lastly, the aperture and shutter speed options are very limited, being only in full stops from f2.8-22 and 1/15-1/500.  Again, this is something that many might see as a downside.  However, I rarely use speeds beyond its range (in a camera like this; I'll pull out the Flexaret if I'm going to do a long exposure), and full stops are perfectly sufficient for a camera that, again, prioritizes simplicity and quickness over ultimate precision.  This also provided a side benefit for me in that it helped me learn the standard set of stops; before shutter speed and aperture were just arbitrary numbers chosen, but using the RC helped me visualize the range of stops and use that information both on it and other cameras when making estimations of light or trading stops between the two settings without changing my meter.

There is one thing that I find annoying about the camera, and that is the aperture ring.  To keep the camera compact, the ring is very small, which I find difficult to turn.  As a result, I tend to operate this camera in (manual) aperture priority mode; I'll set the aperture and only fiddle with the shutter speed as I move about.  Since as I said it isn't small enough to practically fit in a pocket, I would rather have a slightly deeper camera with an easier-to-use aperture adjustment - but we're five decades past manufacture and so there's no hope for a mark ii with this change.

I found the rangefinder patch much smaller and dimmer than I expected.  After a few more cameras, including one that went through a thorough CLA, this seems to be just the way things are.  It reminds me of when I first tried beer and was disappointed that it was so watery and thin (I expected it to be more like milk).  Nevertheless, I do enjoy the experience, and it has prompted me to acquire (at the count of this writing)... three more rangefinders.

In darker situations I find it very difficult to see the patch.  Additionally, the RC does not have room on its focus lens for a depth of field scale, so zone focusing requires a bit more memory (which I have a hard time with since I'm shooting on several different sizes of film and digital sensors).  But out and about during the day, even as the sun is going down, it fulfills its requirements wonderfully of being quick to focus and capture a small moving child.  The actual Disneyland test will unfortunately have to wait - thanks covid. :(

Maintenance Notes on My Example

This was my first camera to exhibit light leaks; in retrospect, the seals were very obviously almost entirely gone in the eBay listing, but I didn't know how to look for that yet.

I bought a $10 sheet of foam from Amazon and spent an hour or something using this guide to replace the seals.  The first time I did this I missed a spot and ended up with several rolls with heavy leaks (I was so excited by the camera that I didn't wait for the first roll to be developed to see the results).  The second time I added more foam on top of what I had put there before; it ain't pretty, but it worked and there are no more leaks.

After comparing results from a few other cameras and observing a few accidental underexposures that turned out quite fine, I've come to the conclusion that my RC runs a stop or two slow.  Until I figured this out I had some problems with over-exposing film; while negative film is pretty tolerant of over-exposure, in some of these situations I figure I was probably six stops over-exposed, which is a lot for consumer film to tolerate!  Some day I will probably get the camera CLAed, but in the mean time I just meter my Pro Image 100 at 400 (I also like the look of it underexposed a tad) and all is good.

I love this camera.  It is the first camera that has been fun for me, in the way that Ruby was.  Like Ruby, the 35 RC isn't the right tool for every situation, but it sparks photographic joy in me every time I pick it up.